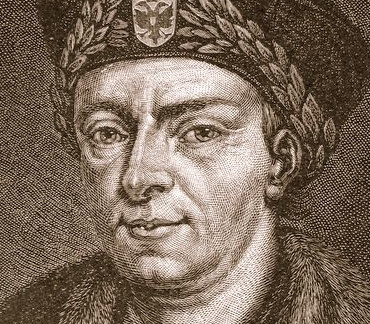 The 'archihumanist' Conrad Celtis was the son of a vintner from Würzburg. In 1479 he obtained a Bachelor's degree from the University of Cologne and continued his studies after his first journey to Italy under Rudolf Agricola in Heidelberg. On a second trip to Italy in 1486 he met important thinkers like Marsilio Ficino. Conrad Celtis was crowned Poet Laureate by Emperor Frederick III in 1487. After various teaching positions and astronomical studies at Kraków he taught poetry and rhetoric at the University of Vienna from 1497. The 'Quattuor libri amorum' are considered the principal work of this pioneer of ancient Greek in Germany and founder of important literary societies.