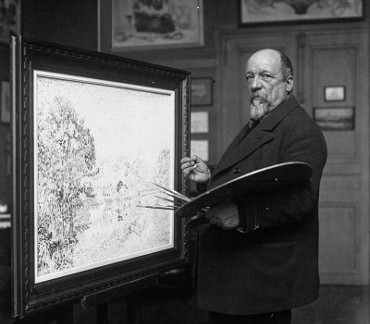 Signac was a French Neo-Impressionist painter who, working with Georges Seurat, helped develop the Pointillist style. In 1884 he met Claude Monet and Georges Seurat. He was struck by the systematic working methods of Seurat and by his theory of colors and became Seurat's faithful supporter, friend and heir with his description of Neo-Impressionism and Divisionism method. Under his influence he abandoned the short brushstrokes of Impressionism to experiment with scientifically juxtaposed small dots of pure color, intended to combine and blend not on the canvas but in the viewer's eye, the defining feature of Pointillism.