Intriguing photo collection, apparently assembled by one of the ten thousands of Italian soldiers that poured into Libya in November 1911. Italy had declared its war on the Ottoman empire in September 1911, when the young kingdom was wracked with economic and social problems and colonial expansion seemed the answer. The largely unknown north-African country was fancifully depicted as rich in minerals, well-watered, and with a population hostile to the Ottoman Empire and friendly to the Italians. While the invasion of Libya was planned as little more than a "military walk", the operation soon encountered strong resistance from the local population, and when Arab cavalry nearly annihilated the Italian expeditionary corps in October, the troops were quickly enlarged to 100,000 men. The "Guerra di Libia", a significant precursor of WWI, is noted for numerous technological advances in warfare, notably the use of armoured cars and airplanes, often regarded as the earliest examples of aerial warfare: Italian dirigibles and Blériot-type planes performed reconnaissance missions and bombed Turkish positions. In the Treaty of Ouchy, signed on 18 October 1912, the Ottoman Empire surrendered Tripolitania, Fezzan, and Cyrenaica to Italy.

The present collection shows Italian troops in their positions, at camps and fortinos, and with their ordnance, horses, and "war dogs", as well as Eritrean Ascari soldiers, Meharists on camels, the local Arab population (as well as local Jews, Sudanese, etc.), bedouins, Tripoli street and market scenes, the port of Tripoli, views of the city, oases, desert expeditions, funerals, the railway, etc. No armoured vehicles are visible, but many army automobiles and - at the distance, a mere speck near the horizon - "in alto un dirigibile" (over the Tripoli port, March 1912). 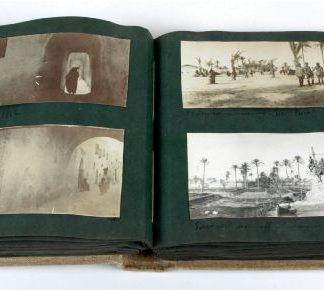