Interesting devotional manuscript in Dutch containing extensive instructions and rules for behaving, praying and meditating, and living a good religious life in a monastery from hour to hour. The booklet also gives the texts prayers and meditations to perform during the day. It is a sort of "Diurnale" (a shortened Breviary), written by the prior of a monastery ("het Syon"), for his brothers.

Strangely enough the text seems to have been written by a Dutchman from the northern Netherlands where all the monasteries were demolished during the beginning of the Eighty Year's War, and where the Roman-Catholic faith was tolerated at best. "Het Syon" is an often used name for a monastery, for example one near Beverwijck, or near Delft, but, again, these cloisters were no longer in existence. Possibly, Johannes Baptista van den Bossche was a refugee from the north and active in the Southers Netherlands. The manuscript is written in a clear, sophisticated, and almost calligraphical handwriting (by Johannes van den Bossche himself?) in two scripts: italic and a script reminding the civilité type. 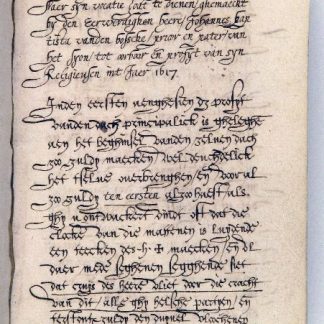