III: An Arabian circus horse with figures and a terrier at the entrance to a tent (240 x 190 mm).

IV: Arabian circus horses, an Arabian foal, Shetland ponies and circus folk outside the bog top (245 x 294 mm). Signed and dated "M. J. Stevens. 1934." - V: Arabian circus horses, both standing and moving in a circular formation around the ringmaster with six Shetland ponies moving in a circular counter-clockwise direction on the outside (240 x 290 mm).

VI: An Arabian horse rearing in a circus stable with other Arabian horses and two figures. Watercolour over pencil (270 x 366 mm).

VII: A female circus acrobat performing in the ring on an Appaloosa horse with the ringmaster in attendance. Watercolour (145 x 197 mm).

A charming series of original watercolours by one of the most sought-after horse painters of the early 20th century, showing the use of Arabian horses in the circus arena during the 1930s. Stevens's possibly most famous work is the watercolour used for the cover illustration of Greely's "Arabian Exodus", one of the principal works on the subject of Arabian horses, first published in 1972 (while her watercolour was produced as early as 1940). As the owner of the Pelere Arabian Stud, Stevens was both a highly respected breeder of Arabian horses and a gifted artist. Born in Penryn in 1903, she received her early tutelage from her mother; this was followed by spells at the Slade and Lucy Kemp-Welch's school at Bushey in Hertfordshire. 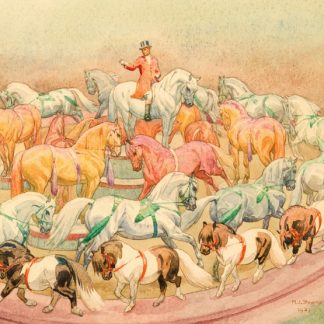