Ockley, Simon. The Conquest of Syria, Persia, and Aegypt, by the Saracens: containing the lives of Abubeker, Omar, and Othman, the immediate successors of Mahomet, giving an account of their most remarkable battles, sieges, &c. [...].

First edition of the author's most famous work. The orientalist Simon Ockley (1678-1720) was educated at Queens' College, Cambridge. He became fellow of Jesus College and vicar of Swavesey, and in 1711 was chosen Arabic professor of the university. His "'History of the Saracens' long enjoyed a great reputation; unfortunately Ockley took as his main authority a MS. in the Bodleian of Pseudo-Wakidi's 'Futúh al-Shám', which is rather historical romance than history. He also translated from the Arabic the Second Book of Esdras" (Enc. Brit.). A second volume appeared in 1718.

This copy includes 2 slightly different versions of the dedication to Henry Aldrich: the second, omitting his designation as 'One of Her Majesty's Chaplain in Ordinary', and containing other changes, is inserted in the preface. 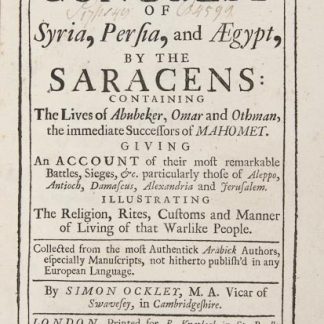