Offering a translation of El Suyuti's Arabic 'History of the Khalifs'

ALS, two and a half handwritten sides on 2 leaves.

Signed "your most obedient humble servant Dr. Sprenger", and concerning various Arabic manuscripts which Sprenger is considering translating. The letter dates from Sprenger's relatively brief time in London (1836-43), and thus predates any of his published works. He decides that Ibn Kourdadbeh's 'Oriental Geography' (the earliest surviving Arabic book on administrative geography) is unsuitable as he can only locate one MS copy. Instead, he offers to produce a translation of Suyuti's famous 'History of the Caliphs', which he notes has been accounted the best of such histories by the Arab encylopaedist Haji Khalfa. Sprenger transcribes several names from English into Arabic for the benefit of his correspondent.

A well-preserved and early letter reflecting Sprenger's outstanding command of Arabic sources. The Austrian-born Sprenger became one of the most noted orientalists of the 19th century, producing a comprehensive 'Life of Mohammad from Original Sources' in 1851. 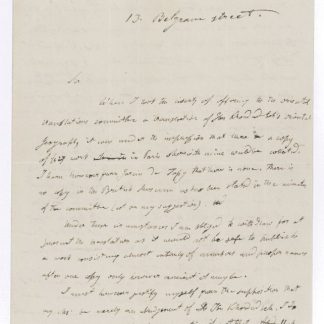