To the Italian poet P. G. Maggi, who had in 1871 published a translation of Swinburne's "Blessed Among Women - To The Signora Cairoli". Swinburne expresses his sympathy for the cause of the Risorgimento and mentions his great Baudelaire elegy, "Ave Atque Vale": "I fear you must have thought me very negligent + discorteous not to have written to you before in acknowledgment at one of your letter of July last, + of the very beautiful version which you have done me the honour to make of my poem addressed 'Alla Signora Carioli:' which reached me without address, or I should at once have written to thank you for the great pleasure it had given me. Nothing, in fact, connected with my work, could give me so much happiness as to know that it found favour - or at least that my intentions found acceptance - in the sight if those Italians whose approval + sympathy I should esteem the truest honour + highest reward I could wish to earn. I wish only that the work were worthier, + more adequate to express my love of your country + its cause - which is the cause of Europe + of the world.

I have not by me a copy of my verses in memory of Baudelaire; but on the first opportunity I will desire my publisher to send you a copy. Your letter of July was directed to an address which I left two years ago; + thus, passing from place to place, it was some months before it came into my hands. I now hasten to acknowledge it + to apologize for the long but involutary delay [...]". 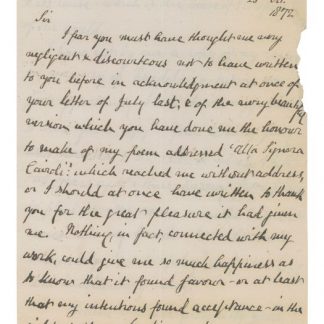