To the English journalist and author John Arlott (1914-1991), on two poems for a possible broadcast on the BBC, expressing concern about reading both: "[...] they're very much alike in feeling and would give a monotonous effect - even if a reader read one of them and I the other [...] I suggest that only Poem In October is selected [...]" (1945?).

The second letter from July 1946 inviting Arlott to lunch and admitting he had already told the host, his patron Margaret Taylor, that Arlott would attend, also mentioning that "I hope you get this note before you go Test-wards". 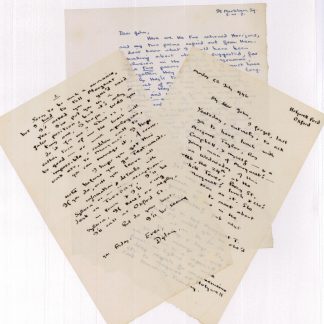