With technical content: "My dear Sir, The anticipated breaking of French's main Lever, through the runner, has come and came, [as] it unfortunately must, in every engine doing any thing like maximum work. I am induced to ask what action Mess. Clute have taken in the matter. You remember my letter of the 13th March, which I read to you and in which I urged it as an imperative necessity for Mess. Clute to put wrought levers on the cast rack shafts in every engine cast in the manner complained of - I hope Mess. Clute, in the face of my letter, have not sent down a new batch of engines without doing what they expressed themselves willing to do. Should the matter have been neglected, then order them at once to send you wrought iron main levers as fast as they can make them and let Banks turn the rack shafts and put the levers on Line." - In a lengthy postscript, he continues: "Frank's engine is being pushed at Delamatin [?] with all possible speed but quadruple work has been done to which was expected. The engine appears to have been kept at white heat for hours as the wood in the supply picture was completely burnt out." - The Swedish-born engineer Ericsson made numerous changes to the steam engine. By 1859, Ericsson was working on war ships, and by 1862 he designed and built his famous ship, "The Monitor", inaugurating a new era in warfare by creating vessels capable of launching torpedoes. He was the designer of the Union's Monitor and the first screw-powered vessel. A superb, scientific letter. 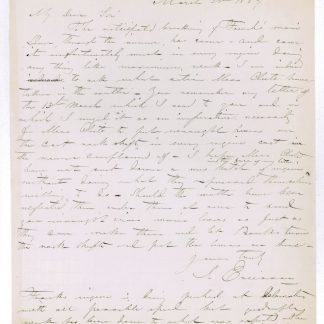