In French, to the Knights of the Golden Fleece. In 1499 Henry’s uncle, count Engelbert II, invited him to the Burgundian Netherlands as his heir. On the death of his uncle in 1504, Henry inherited the Nassau possessions in the Netherlands, including the wealthy lordship of Breda in the duchy of Brabant. He was an important confidant of the young Emperor Charles V, serving as his chamberlain and as ambassador to Francis I. In this short letter Henry acknowledges receipt of a letter from the Knights of the Toison d’Or, via Maistre Laurent du Blioul ("greffier" or registrar of the order), to whom he has rendered a report and he declares himself at their service. The address panel gives "Les ch[eva]l[ie]rs confreres de lordre de la thoison dor." The Order of the Golden Fleece had been founded in 1430 by Philip III, Duke of Burgundy to celebrate his marriage to the Portuguese princess Infanta Isabella of Portugal, daughter of King John I of Portugal. It became one of the most powerful European chivalric orders and exists to this day. Henry of Nassau was elected to the Order in 1505. 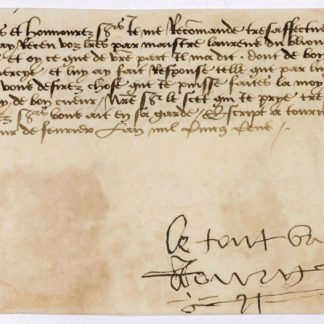