To "mon cher comte", informing him of a detour to Paris to see Madame de Laval.

Talleyrand, one of the most powerful French statesmen of all time, whose career straddled the Ancien régime, Revolution and Restoration was successively a bishop, a revolutionary who assisted in the drafting of the Declaration of the Rights of Man, an exile in America, and Foreign Minister to both Napoleon and his successor, the restored Bourbon king, Louis XVIII. He was also, of course, a legendary womaniser. "He believed that power and intelligence were the perfume of courtship and he wielded them with deadly charm" (Schama). In this short note he writes that he intends to extend a journey, probably from his home at Valençay to Bourbonnes-le-Bains (Haute-Marne, a spa town) and pass via Paris, because he will have the chance to see Madame Laval "si elle passe par Paris comme je le crois". He writes that it will only extend his journey by 25 leagues (at least 100 miles). Madame Laval was the longest-standing of all his many mistresses. A noted hostess and lover of gambling, Talleyrand had first seen her at the coronation of Louis XVI and she soon became his lover. Despite other passions the two remained remarkably loyal to each other until the end of Talleyrand’s life. Contemporary Aimée de Coigny characterised Madame de Laval as "changeant d’amants presque autant que d’années" and as "maïtresse de M. de Talleyrand quand elle était jolie, actuellement son amie très exigeante". 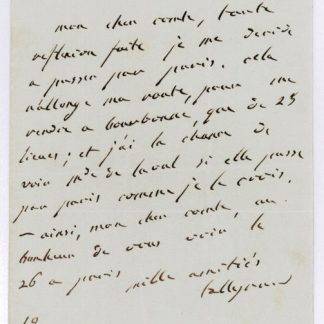