On philosophy and natural science: the most extensive Schopenhauer manuscript to appear on the market for over a decade

The manuscript discusses cosmogony and the movement of the planets, mentioning the contributions made by Immanuel Kant and especially Laplace, as well as Kepler's Laws, then expanding these considerations to the level of metaphysics. This is the working manuscript for vol. 2, chapter 6 ("Zur Philosophie und Wissenschaft der Natur") of Schopenhauer's collection of philosophical reflections, "Parerga und Paralipomena" ("Appendices and Omissions") - the philosopher's final work, published in 1851. The "Paralipomena" volume, from which this is taken, contains short ruminations arranged by topic under 31 subheadings. In view of the less-than-enthusiastic reception of the philosopher's earlier publications, publishers were reluctant to commit to this work; it was only after significant difficulty (and through the persuasion of the philosopher's disciple Julius Frauenstädt) that Hayn of Berlin consented to publish the two volumes in a print run of 750 copies - with a honorarium of only ten copies for the author. The subject matter and stylistic arrangement of the "Paralipomena" were significant influences on the work of the philosopher and psychologist Paul Ree, and through him most notably on the philosopher Friedrich Nietzsche, whose later work explores - following Schopenhauer - the relation of man to himself, the universe, the state, and women through the art of aphorism.

In the present manuscript, Schopenhauer writes: "The truth of cosmogony, however, is based not only on the space-relationship upon which Laplace insisted, namely, that 45 celestial bodies circle in a uniform direction and at the same time rotate likewise; more firmly still is it rooted in the time-relationship, expressed by the first and third Law of Kepler [...] These thoughts on cosmogony give rise to two metaphysical reflections [...] Even such a far-reaching physical explanation of the world's creation can never satisfy the desire for a metaphysical one, or indeed take its place. On the contrary! The closer one comes to tracking down a phenomenon, the more clearly it appears that it is precisely that: a mere phenomenon, an apparition, and not at all the essence of the thing in itself [...]" (transl.).

Slight edge damage. Provenance: On loan to the Dresden State Library until 1945; later in a foreign private collection. Sold at Stargardt's auction on Oct. 4, 1989. Schopenhauer manuscripts are of the utmost rarity: auction records since 1975 list only five other autograph manuscripts, only one of which was of comparable length. 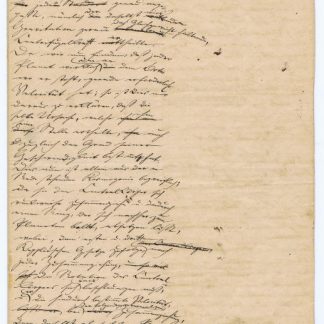