Confiscations of the Revolution

To the administrators of nationalised goods. Thoüin encloses (not now present) his inventory and valuation of the trees, bushes and gardening implements contained in the garden, Rue Notre Dame des Champs, which previously belonged to the Chartreuse of Paris. He explains the basis of his evaluations.

Thoüin was born in the Jardin Royale des Plantes, Paris, where his father was the head gardener. Trained by Bernard de Jussieu, he succeeded to his father's post at an early age and, with Buffon, doubled the size of the garden. He built up an extensive correspondence network for the exchange of information and specimens. In 1784 he became a member of the Société Royale d'Agriculture, and in 1786 was elected to the Académie des Sciences. In 1793 he was appointed Professor and Administrator of the Musaeum d'Histoire Naturelle and was one of the first members appointed to the Institute on its foundation. The author of numerous botanical works, Thoüin maintained a botanical salon, in his apartments in the Jardin des Plantes which was frequented by Rousseau, Malesherbes, Bernardin de St Pierre, Faujas de St Fond, Bose and Desfontaines among other scholars and travellers. 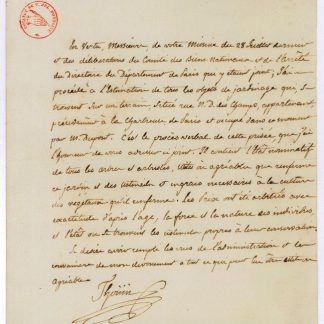