Knolles, Richard. The generall historie of the Turkes, from the first beginning of that nation to the rising of the Ottoman familie [...]. Together with the lives and conquests of the Ottoman kings and emperours.

Fifth edition. "The great history of the Turks by Knolles (c. 1550-1610), the prose of which earned the praise of Samuel Johnson, and was later utilised by such travellers as Byron [...] The fine medallion portraits of the Turkish kings, emperors and sultans together with their (mostly) Christian adversaries, were adapted by Laurence Johnson from Jean Jacques Boissard's 'Vitae et Icones Sultanorum' (1596)" (Blackmer 919). "The recent victories of Mahomet III over the Christians must have rendered the Turkish question of vital interest to the security of Europe, and the struggle remained in the balance till the end of the seventeenth century" (Hind II, 36-38).

The first folio edition appeared in 1603. James VI of Scotland became James I of England in March of that year following the death of Elizabeth I. Knolles took advantage of the dynastic transition by dedicating the work to "the High and Mightie Prince James". Knolles' "Historie" is based heavily on a range of 16th-century printed chronicles and reports. It is, therefore, essentially a synthesis of other works, but a carefully crafted synthesis produced in English. Nothing of this scale and detail had appeared before in English on the Ottomans, and it would be another fifty years before a subsequent work in English would become the authority on the subject. Despite this fact, both Samuel Johnson and Lord Byron turned to Knolles centuries later, and both alluded to the richness of his prose style. William Shakespeare, moreover, likely used Knolles’ work (and possibly an earlier manuscript version) as a source for his 'Othello' in 1603/04 (cf. Parry, 2003). 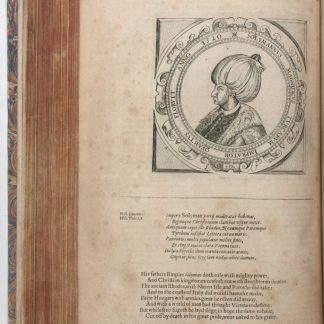 Sie sehen: Knolles, Richard. The generall historie of the Turkes, from the first beginning of that nation …London, 1638. € 3.000,00
In den Warenkorb