Ca. 130 leaves, plus numerous inserts and pasteovers. Octavo. Original publisher's letterpress proofs, with authorial corrections and revisions (including substantial insertions and deletions) throughout, with leaves and slips of typescript (many with additional manuscript additions) inserted, bound up with preliminary drawings for the layout of the title leaf and ornaments. Full deep red brown crushed levant by La Haye, with geometric inlays in red and medium brown morocco extending across boards, with doublures with matching red morocco inlays, t.e.g., others untrimmed. One joint a bit rubbed, some spotting along top edge of upper board, with small ink drop on spine, internally very good consistent with nature of material.

Maurois's set of corrected galley proofs for this work, the preliminary mock-ups still reflecting the working title, "Nicias: Trois [entretiens, changed to] dialogues sur le commandement". While the proofs show the usual corrections of mechanicals and the like, Maurois also chose to substantially edit and rework the text in a number of places by way of pasteovers and inserts (including in one instance three full quarto leaves of typescript, and several other instances of almost full leaves of single-spaced typescript). He made substantial deletions of a number of long passages and the original text remains completely accessible. An inserted preliminary bears Maurois's caption title for his work in his hand (including two additional alternate titles), and his presentation inscription: "Pour Jean Lévy-Strauss, ami du livre et de l'auteur, en affecteux souvenir".

Talvart & Place notes the preparation of fifteen copies of the text prior to correction for circulation hors commerce; the corrected text for which these proofs and leaves of manuscript/typescript evidently served as basis was published in the distinguished Les Cahiers Verts series. 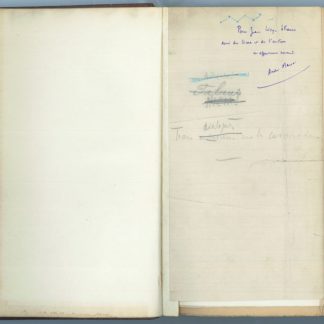