To John Henderson, Secretary of the National Liberal Club: "I received last night a letter from Mr. Lucas, forwarding your kind wish that I should respond for The Guests on Thursday evening. I don't want to be thought an idle vagabond or an ungracious knave, but be kind to my nervous state, + have me excused. I speak, when I do speak, under a great strain, although you will think I go on so long that I must be altogether happy; but indeed I am desperately puzzled all the time, + it takes me some days before + after of painful thought about the occasion [...]" (March 5, 1929).

"Indeed I haven't forgotten you - no chance I suppose of your being at tonight's Elian? I hope very much you will induce the London Library to possess the Tibble's book on Clare. It would be worth their while merely as containing a great mass of prose and verse, mainly new to print, by Clare himself - his diary for example, which is one of the most natural + attractive Diaries I have read [...]" (February 14, 1934). 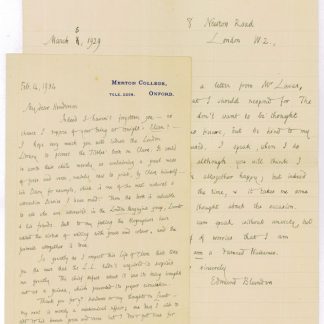