To John Henderson, Secretary of the National Liberal Club: "I am afraid the conditions mentioned in your letter may present difficulties hard to overcome. (a) I had mislaid your letter & telegram, & therefore mistaken the date [...] (b) I should be in terror of such a condition of time as you suggest, constantly watching the clock and feeling that my hearers might wish to jump at any moment & run off to their offices. I would be quite impossible for a nervous man like myself to speak with such a sub-consciousness. I could not attempt to do it [...] (c) The atmosphere of divided opinion in the National Liberal Club with respect to the Prime Minister would also seriously trouble me, lest I should be bringing down on my hosts disagreeable reflections & a spirit of discord. Personally, I should have thought that the divided opinion in the Liberal Party about recent acts of the Prime Minister provided just the most favourable condition for such a speech as I should propose to make [...]". 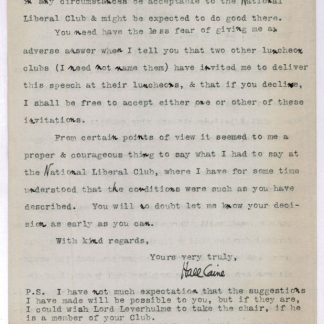