To an "Editorial Board": "What you asked me in your last letter represents the hardest task for me. I am a badly organized and lazy person in regards to anything that is not related to my direct work, which is sculpture. There is enough literature, a few monographs, and lots of magazines and newspaper articles, but to put it all together is beyond my ability. I will send you the one that I received recently as an example. Incidentally this is one is flattering, but there are a few that are not so rewarding. Anyway - all that is not really important. I believe that the day will come when the contour of my art will become clear. Meanwhile, for those who want to know from where I came and how old I am - here is my short autobiography. I was born on 30th of August (new style) in v[illage] Druskeniki; Grodno county, in a pious Jewish family. I studied at vocational school in Vilna and in 1909 went to Paris to study scultpure (I did some as a self-taught since my early childhood). So I have lived here since that time, I even became a naturalized French citizen. I studied at the Academy and since 1912 have had several exhibitions in different salons, but not many. I did have a personal exhibition at the Rosenberg gallery in 1920 and a second one, very extensive in 1930. My works are in different personal collections and museums. There is not much exciting in happening in my life. That's all. With all my respect [...]".

Though Pablo Picasso is credited with creating Cubism, Lipchitz advanced and further interpreted the style by applying the principles of Cubist painting to sculpture. When he moved to Paris in 1909, he became acquainted with Picasso, as well as fellow sculptors Juan Gris and Alexander Archipenko. During this time he created Cubist sculptures including his "Sailor with Guitar". In 1924, Swiss avant-garde architect Le Corbusier built a studio for Lipchitz on the outskirts of Paris, whence our letter was written. By the time the Nazi's occupied France, forcing Lipchitz to move to the U. S., he was known around the world.

Folded with a small vertical fold tear at the upper edge and four file holes in the margin not affecting the text. With a moderate amount of foxing and some uneven age toning on the recto. A fragment of paper headed "Le Musée" is affixed to the upper left corner. 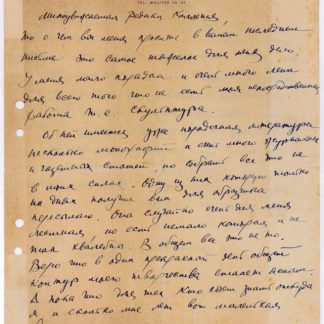