The first comprehensive English book about the care, breeding, and riding of horses

Blundeville, Thomas. The Foure Chiefest Offices Belonging to Horsemanship: That is to Say, the Office of the Breeder, of the Rider, of the Keeper, and of the Ferrer.

Early edition of the first comprehensive book in the English language about the care, breeding, and riding of horses. The "Four Offices" are those of the breeder, rider, keeper, and ferrer: this volume contains the first two offices. Among the illustrations are 43 full-page examples of bits and bridles. Some 17th- or 18th-c. ink annotations. Blundevill(e) (1522-1606) was, according to the Arabian Jockey Club, "one of the founders of the thoroughbred industry." He originally translated Gisone's "Gli Ordini di Cavalcare" (1550) as "The Art of Rydynge" (1560), which was the first modern treatise on classical dressage and later incorporated as one of the chapters of this book. First published in 1565/66; all editions published prior to 1650 are considered uncommon. 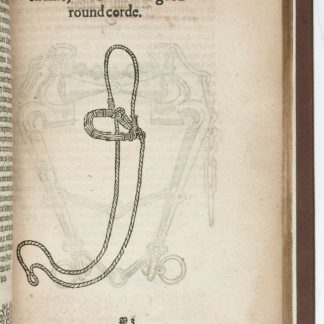 Sie sehen: Blundeville, Thomas. The Foure Chiefest Offices Belonging to Horsemanship: That is to Say, the …London, 1609. € 8.500,00
In den Warenkorb