Large manuscript plan in beautiful colour; a unique witness to Vanderbilt's passion and ambitions. A member of the prominent American Vanderbilt family, William Kissam (1849-1920) managed railroads and was also a horse breeder. He was one of the founders of The Jockey Club and the owner of a successful racing stable. In 1896, Vanderbilt built the American Horse Exchange at 50th Street (Manhattan). In World War II, the United States liberty ship SS William K. Vanderbilt was named in his honour.

This impressive plan represents the horse-racing stable and track at the chateau, which Vanderbilt built in 1906, with the help of Henri Guillaume and Pierre Sardou, architects. He purchased in 1903 the land in an area of Poissy called Les Gresillons, 20 miles outside Paris. At the time, he ran a breeding operation in Deauville, making the location, also called "Carrieres-sous-Poissy", particularly convenient since it is on the way from Paris to Deauville. The hippodrome comprised three oval tracks, the outer of which measured 2400 metres, as well as a straight track. A long wall separated the racing areas from the Chateau St-Louis where the Vanderbilts lived, called the Chemin Plat, now known as Avenue Vanderbilt. With the beginning of World War I, the racing stables were shut down and eventually sold. The Chateau St. Louis is now the corporate headquarters for a local quarry, which spreads over the land previously occupied by the hippodrome. As of today, only the residential building known as "Chateau Grésillons" still stands and is currently being restored. 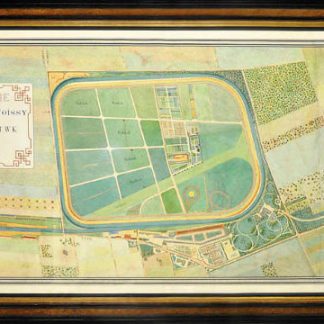