To E. J. Evans of Skewen (unnamed), secretary of the Port Talbot Forum, in favour of a pension to be awarded to the Welsh poet Huw Menai (i.e., Huw Owen Williams, 1886-1961): "Dear Sir, Please forgive my not having answered your letter before this. I have just come back to Wales to live, & letters have been misforwarded. I shall be most grateful if you will include my name in the list of those who are supporting the appeal to the Prime Minister for a Civil List Pension to be awarded to Huw Menai. I have the greatest admiration for him - though I do not know him personally - & for his work, & I think the Port Talbot Forum is to be congratulated in its sponsoring of the appeal - which I do most sincerely hope will succeed [...]". 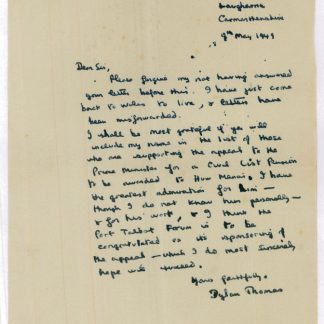