Portraits of the Godolphin Arabian, Lath, and many others

Roberts, James. The Sportsman’s pocket companion: being a striking likeness or portraiture of the most eminent race horses and stallions [...] drawn by James Roberts and engraved by Henry Roberts.

Fine series of plates, each depicting a famous horse with his rider or stable-hand, and recording its pedigree, qualities and racing record, together with the owner's name. The final plate shows the most famous of all, the Godolphin Arabian (here called the "Bay Arabian, the property of the Right Hon.ble the Earl of Godolphin"), foaled in Yemen around 1724: "This extraordinary horse became a private stallion soon after his arrival in this kingdom, and got a greater number of fine horses of just temper with superior speed than any Arab ever did. He was the Sire of Lath, Dismal, Cade, Bajazet, Babraham, Phenix, Dormouse, Regulus, Skewball, Sultan, Blanck, Slugg, Noble, Tarquin, Blossom, the Godolphin Gelding, Shepherdess, Amelia, and many others besides stallions and brood mares, all in the highest esteem; he died at Hogmagogg Hills, Dec. 1753, in the 29th year of his age".

Among the other horses are Lath, the Godolphin Arabian's offspring by Roxana; Basto (son of the Byerly Turk); Old Scar, whose ancestry included the Oglethorpe Arabian and Darcy's Yellow Turk, etc. The horses pictured all ran between 1708 and 1755. The first edition was published in about 1760. Rare, only two copies recorded in ABPC/AE Online. ESTC records two issues, one published and sold by Henry Roberts, the other printed for R. and R. Baldwin (as here): just one location is given for the first issue (Winterthur), and one for the second (BL). Huth records the work under a variant title, and also notes an 1820 edition.

Plate 12 shorter at margins, some spotting and browning, heavier at margins. A most handsome copy. 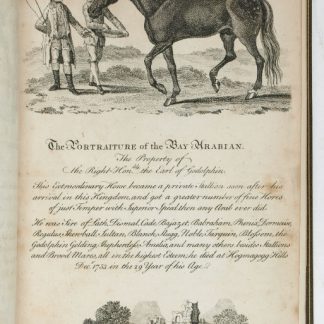