Markham, Gervase. Markham's Maister-Peece, Containing all Knowledge Belonging to the Smith, Farrier, or Horse-Leech, Touching the Curing of all Diseases in Horses [...] Now the seventh time newly imprinted, corrected and augmented [...].

Extremely rare and early edition of this great English hippiatric manual, first published in 1615, by one of the earliest Western owners of and dealers in Arabian horses. A distinctly modern touch is provided by the small woodcut pointing hands scattered about the margins, denoting new cures and "medicines that are most certaine and approved; and heretofore never published". Gervase (Gervais, Jarvis) Markham, as well as his father Robert, a Nottinghamshire MP and Sheriff, was the owner of valuable horses, and "is said to have imported the first Arab. In a list of Sir Henry Sidney's horses in 1589 'Pied Markham' is entered as having been sold to the French ambassador [and it, or a horse of the same name, may have been given to Markham by Sir Francis Walsingham], and Gervase sold an Arabian horse to James I for £500" (DNB).

Variously browned; occasional corner faults (no loss to text). From the library of Sir Robert Throckmorton, Bt. (1800-62), member of an eminent Anglo-Catholic noble family who sat in the House of Commons from 1831 to 1835 (his bookplate on front pastedown; a later bookplate is opposite on the flyleaf). 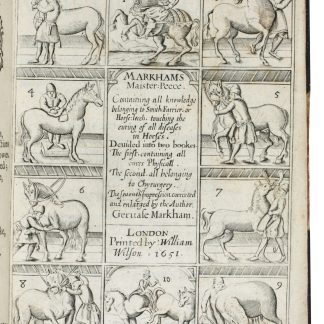