One of the author's most sought-after and earliest publications

Prisse d'Avennes, Achille Constant Théodore Émile. Oriental Album. Characters, Costumes, and Modes of Life, in the Valley of the Nile.

Second edition of one of the most sought-after and earliest publications by Prisse d'Avennes, who spent many years in Egypt after 1826, first as an engineer in the service of Mehmet Ali. After 1836 he explored Egypt disguised as an Arab, using the name Edris Effendi; during this period he carried out archaeological excavations in the valley of the Nile. In 1848 he first published his "Oriental Album". This unusual visual collection of "characters, costumes and modes of life in the valley of the Nile" is augmented by a commentary by the renowned orientalist and Egyptologist James Augustus St. John.

The frontispiece portrait depicts the artist's friend George Lloyd in the robes of a sheikh reclining with a hookah, and camels in the background. Lloyd, a botanist accompanying the expedition, accidentally shot himself whilst cleaning a rifle.

Light foxing, affecting some plates, with 2 plates trimmed at foot and laid down. 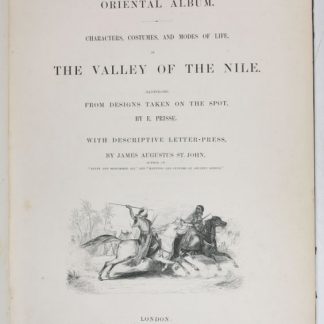