An elegant and delightful series of manuscript portraits of horses by an unidentified Japanese hand. 'The Hundred Horses' was a popular subject in Japanese art and is represented both in panel pictures, scrolls and books. The title is representative rather than prescriptive and does not denote one hundred in number, but simply 'many'. While the horse was an ancient component of Japanese art, the subject of the Hundred Horses was probably introduced into Japan under Chinese influence by the beginning of the Edo period (1603), with associations of courtly culture based on the noble and military connotations of the horse. The concern here is for careful typology of the different breeds, with characteristics of physique and markings neatly depicted and explained in the captions ('chestnut', 'spotted' etc), but the various postures and attitudes are arresting. An example of a manuscript book of similar period, slightly more elaborate, is preserved in Waseda University Library. 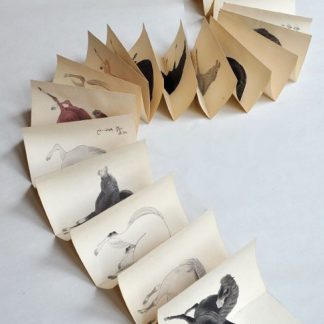