[Austrian Toy Theatre]. The Caravan to Mecca. The Halt in the Desert.

Charming Mignon Theatre of the kind popularized by the Viennese publisher Trentsensky around the mid-19th century and distributed throughout England by their London agent Myers, & Co. on the corner of Oxford and Berners Street. The desert landscape backdrop is to be populated by the pilgrims, camels, resting horses, etc., with plants, a large tent, a cooking fire, and many other details, all to be cut out from the present set of plates. Issued as "Exercises in Colouring", this set was clearly coloured by a trained contemporary artist rather than a dilettante.

The front cover is stained, spine splitting, but the plates are clean and well-preserved. Rarely encountered complete, well-coloured, and in the original state. Another example, prominently featured in the 2012 Hajj exhibition at the British Museum, was cut and mounted. 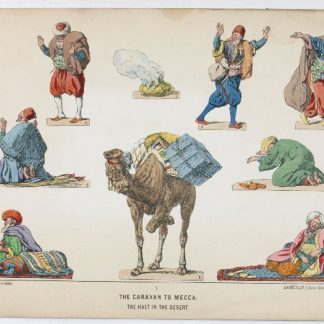