Constantinople, Smyrna and other places, c. 1850.

A remarkable scrapbook evidently compiled in Turkey over a period of time, mainly the 1860s and 1870s. This album includes a number of prints from the well-known period lithographic series produced by the celebrated Smyrna printer Tatikian. The figures are notable for the naturalistic qualities which set them apart from the so many other stylised costume plates: "the drawings seem to be of real people, and are not idealized. Most of the plates depict the costume of the ordinary people of the Ottoman Empire, including a number from the region of Smyrna. [...] Tatikian produced these lithographs as separate items, much as postcards are produced today, and the customer purchased only those which interested him. Thus the contents of different collections vary" (Atabey). The figures here present include Sheikhs, public scribes, Albanian priests, an Armenian water carrier, Greek ladies, etc., mostly living in Smyrna. The photograph, showing a "Kiosk erected in the Sultan's Valley at Baicas for the Empress Eugenie to review the troops", is dated Oct. 1869. Other material in this fascinating and wide-ranging trove includes diplomatic passports, quarantine passes in Ottoman Turkish, lithographs of Sultan Abdul Medjid Khan and Sultan Abdul Aziz, an outstanding leaf of Arabic calligraphy, consisting of an epitaph on Mehmed Chelebi by the poet Sururi (with English interlinear translation), a watercolour of "Mohammet's ascent to Heaven on 'Borak'" (with the Prophet's face veiled), and assorted collected invitations and deeds, many in Hebrew (indeed, the collector of this scrapbook would seem to have moved much within the Jewish community of Smyrna), as well as a few specimens of East Asian art. 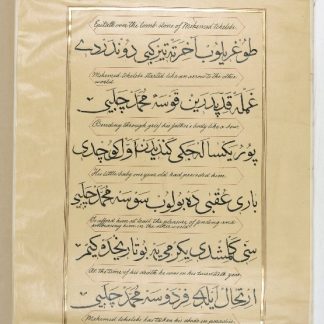