Arabians of Lawrence: 14 photographic portraits of sheiks & tribesmen, by Lawrence of Arabia’s Chief of Staff

Small but fascinating collection of portrait photographs showing Arabian nobles as well as commoners, all captioned and the subject often identified by name and tribe. The photos, many of which are executed as highly expressive profile studies, were taken and assembled by Lt. Col. Walter Francis Stirling (1880-1958), Chief of Staff to T. E. Lawrence. While the present photographs were taken during his time with Lawrence, whom Stirling revered, it is not his British comrades but rather the striking features of the sheikhs and bedouins on which this collection is focused. Among the images are "Sheik Gawaileh of Nejd, one of Lawrence's Bodyguard", and "Sheikh Hamondi, Friend of Lawrence"; others are more ominously identified as "Yezidi Shepherd, Devil worshipper" or "Bad type of Hadadiyim Tribesman". Of many noble tribesmen here depicted, such as Fauraz ibn Sha'laan, Emir of the Ruwalla, or Sheikh Daham al-Hadi, Paramount Sheikh of the Shammar tribe, these probably constitute the only photographic record.

Stirling was trained at Sandhurst and served in the Transvaal operation during the Boer War before being seconded to the Egyptian Army in 1906. He spent five years patrolling with an Arab battalion on the Eritrean and Abyssinian borders. Throughout WWI he served at Gallipoli and the Palestinian campaign until he was appointed chief staff officer to Lawrence of Arabia, who called him "Stirling the imperturbable". In 1937, Stirling would reflect on his famous wartime comrade: "From then [early 1918] throughout the final phase of the Arab revolt on till the capture of Damascus, I worked, travelled, and fought alongside Lawrence [...] We sensed that we were serving with a man immeasurably our superior [...] In my considered opinion, Lawrence was the greatest genius whom England has produced in the last two centuries [...] If ever a genius, a scholar, an artist, and an imp of Shaitan were rolled into one personality, it was Lawrence." In 1919 Stirling became advisor to Emir Feisal and Deputy Political Officer in Cairo, then acting governor of Sinai and Governor of the Jaffa district in Palestine before moving to Albania in 1923 to take up a position advising and assisting in the reorganisation of the Albanian Ministry of the Interior. 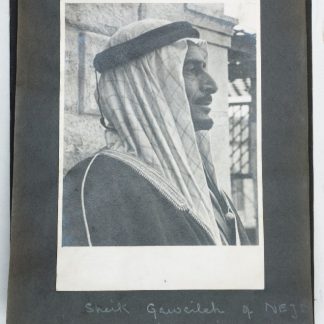