To an unidentified German recipient who had asked Macaulay to intercede on behalf of a literary friend: "My knowledge of German literature is very small. I now and then spend an hour with Schiller and Goethe. But I am ashamed to say that I do not know their successors even by name. I am quite willing to believe that you have formed a correct judgement both of your friend's poetry and of the treatment which he has experienced. But I do not think that he would at present have much chance of obtaining employment in the public service. As to myself, I have no patronage, except indeed a few small places in Chelsea Hospital. None of these places is vacant; nor would any of them suit a foreigner and an accomplished man of letters. The clerkships in the pay office are not in my gift, but in the gift of the Board of Treasury. For many reasons it seems to me that your friend would do well to aim rather at private than at public employment [...]". 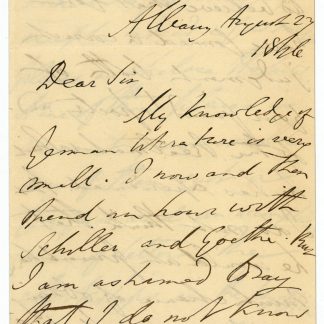