"I languish to see you again": Prince Frederick Louis's correspondence with Francis Stephen of Lorraine

Historically significant, intimate letter to the later Emperor Francis Stephen of Lorraine on the sensational engagement of Farinelli at the "Opera of the Nobility" and other subjects: "My Intimate [Mon Intime], let me first give you thousand thanks for the compositions that you have sent me. I have played some of them and I missed the charming Comte de Blamont at every pause. I hope that you are convinced that I did not need this to miss you, it only takes meeting you [once] in order to love you ever after. You ask me how I like Farinelli; extremely, I assure you, so much so that I do not find anything comparable to him. My sister likes him so-so because Carestini sings in Handel's house and he [Farinelli] sings at Porpora's, where I always go, apart from that she only heard him two times in the chamber. She has left for Holland yesterday and Amalia has been in Bath for two months; you see my family scattered to all edges of the world. I hope that my fate is such that it will lead me to meet you sooner or later, as I languish to see you again. I send you an Opera and an Oratory that seem beautiful to me. The first will please my Intimate, concerning the latter, I'm afraid that it will be too serious for you but since I know that the Emperor and the Empress are amateurs of this kind of music, I am sending it to you for them, in case you deem this piece of music worthy of being performed before them. I have to make you many compliments on behalf of my entire family that is asking you, as much as I am, not to forget them" (transl.) - The identification of the recipient with Francis Stephen is unambiguous due to the epithet "mon Intime", which is employed in all of Frederick Louis's letters to Francis Stephen conserved in the Austrian National Archive in Vienna and the reference to Francis Stephen's incognito "Comte de Blamont" that he had used on his 1731/32 voyage to England (Ágústsson 2016, pp. 149f.). The two men first met in late October 1731 upon Francis Stephen's arrival in London and spent much time together over a period of eight weeks, starting their long-lasting correspondence soon thereafter. As the letter beautifully documents, Frederick Louis was extremely fond of Francis Stephen who first inspired his passion for music. In a letter from 1732, Frederick Louis confided to his intimate: "I think I have not told you yet that I have hopelessly [corps perdu] immersed myself in music and to make thinks even more touching, I chose the cello, a serious instrument" (Austrian National Archive, LHA, 127-3). What followed was a regular exchange of the newest compositions from their respective courts that was accompanied by intimate letters. The letter at hand also bears testimony to the strained relationship between Prince Frederick Louis and his family, particularly King George II as their conflicts were also carried out through music. In direct opposition to his father's patronage of Handel’s "Royal Academy of Music", Frederick Louis had co-founded the short-lived "Opera of the Nobility" in 1733. After an unsuccessful first season, the opera’s musical director Nicola Porpora, mentioned in the letter, managed to engage his most famous student Farinelli who saved the company from bankruptcy, while Handel’s house failed. This conflict is encapsulated in Frederick Louis's statement concerning his sister Anne's reserved opinion on Farinelli and her refusal to see him at the "Opera of the Nobility", favoring instead Handel's lead Giovanni Carestini. This was just as much of an expression of loyalty towards her father as of personal animosity towards her brother who didn't approve of her marriage to William IV, Prince of Orange a few months before the letter was written. It is left to speculation whether Francis Stephen had a hand in the engagement of Farinelli by Porpora. We do know, however, that the singer arrived in London with letters of recommendation by Empress Elisabeth Christine and by Francis Stephen himself, while the Imperial ambassador in London was informed that Emperor Charles VI expected Farinelli to receive his full protection during the engagement. 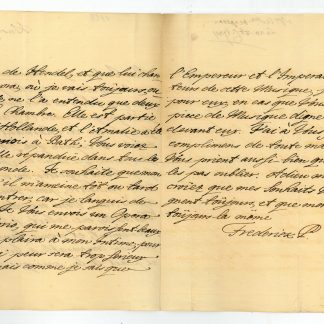