Striking old color example of the second edition of Mercator's Ptolemaic map of the Middle East, first issued in the 1695 edition of Mercator's Geographia, based upon the works of Claudius Ptolemy. Mercator's map was a landmark in the mapping of the Arabian Peninsula, being the last published edition of Ptolemy and without question the most heavily researched and studied of all editions by its maker. Ptolemy had originally drawn on the accounts of travelers and sailors and though the information was secondhand and often inaccurate it represented the most advanced account of the world's geography at that time. In the case of Arabia, Ptolemy overestimated both the width of the southern part of Arabia and the size and shape of the Persian Gulf. Arabia Petrea and Arabia Deserta are both placed in the north and Arabia Felix is the term applied to the whole peninsula, rather than to the southern portions of it. Ptolemy's map, as interpreted by European cartographers such as Mercator, was hugely influential and served as a standard for European mapping of the peninsula for many years. 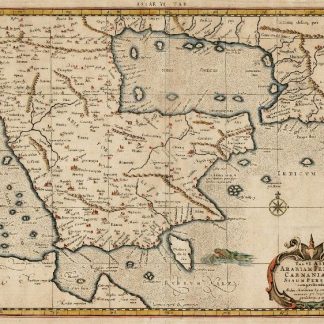