Oblong folio (400 x 250 mm). With 19 (of 24) numbered leaves containing about 135 lithographic pen-drawings of people, animals, equipment & gear and goods, from a caravan travelling to Mecca, each drawing including a base so that one can cut them out, paste them on card stock, stand them up and arrange them in three-dimensional scenes. Lacking leaves 1-5 (of 24). Loose leaves in a later paper folder.

All but the first five leaves of a very rare lithographic print series issued in parts. Most copies were probably cut up (and perhaps coloured) by children and destroyed in play. The human figures to be cut out include Turkish, Arabic, African and Near Eastern men and women (black and white) in Islamic clothing, including both masters and servants, some of the men with a variety of firearms, spears, daggers, pipes (straight pipes and hookah water-pipes), prayer rugs, and other gear and goods, and servants setting up a tent. There are also camels (both single-humped dromedaries and two-humped Bactrian camels), horses and donkeys, often with their gear for riding or for carrying loads. The wild animals include wolves, a hyena and an ostrich. Inanimate objects include containers for water, an incense burner, baskets, chests, barrels, camel saddles and much more. The series must have provided many children and adults with their first notion of Islamic society and culture and is rich in authentic details, such as a dromedary with its left front leg bent up and tied around the knee. Kleine Welt des Bilderbogens dates the series ca. 1855, just after Sir Richard Burton's famous successful visit to Mecca disguised as an Islamic Afghan in 1853 (he was one of the few Europeans who had ever visited Mecca and lived to tell of it). The complete series of 24 leaves comprised four groups of leaves, each leaf with the title, relevant subtitle and imprint (without date) at the foot: 1-6: Die Ueberbringung des heiligen Teppich. 7-13: Die Reise durch die Wüste. 14-16: Das Lager in der Wüste. 17-24: Die Gefahren der Wüste. The artist is not named. The drawings are printed on unwatermarked wove paper. Since the paper is fairly thin and the drawn bases have no folding tabs, the publisher probably intended the cut-outs to be pasted onto card stock with a folding tab at the foot of the base so that they could stand with no other support.

With an occasional pencil mark. Lacking leaves 1-5 (all but the last leaf of the first group), but otherwise in good condition (remarkable good considering the wear and tear that most such items see) and with the other three groups complete. The whole is slightly browned and the edges somewhat tattered (1 small tear slightly affects one camel and another very slightly affects one drawn base). Richly detailed lithographic drawings for about 135 paper cut-outs for a Caravan to Mecca. 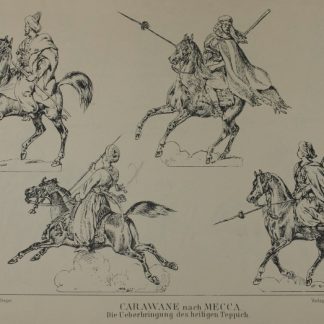