Discovery of the Canary Islands in classical Greek and Roman, Arabic and Portuguese sources

Folio. (4), 232 pp. With a woodcut Portuguese coat of arms with owl and Hermes staff on the title-page, decorated "Tuscan" titling caps for the title and script type for the author's name. Set in roman and italic, with transcriptions of and quotations from documents in Greek and Arabic.Modern brown paper wrapper, side stitched through 3 holes.

A detailed scholarly study of ancient sources for the history and geography of the Canary Islands, attempting to prove that the Portuguese discovered them before Islamic explorers, and that Islamic geographers knew them only through classical Greek and Roman sources. The main text (pp. 1-105) is followed by extensive notes from a wide variety of sources (pp. 107-168) and transcriptions of numerous primary sources, some in Greek or Arabic (pp. 199-232). In passing it also provides a wealth of information about navigation in the Mediterranean and Atlantic by classical Greek and Roman and by Islamic explorers.

Macedo (1777-1867), son of a Lisbon professor and librarian, was an historian, archivist, councillor to the Kingdom of Portugal and a member of many academic societies at home and abroad. His work on Portuguese explorers in general and the Canary Islands in particular began with a brief 1816 essay read to the Academia Real. He returned to the subject after almost thirty years, publishing the present account in both the present separate publication and as vol. VI of the proceedings of the Academia Real das Sciencias. While Macedo's claim for Malocello's discovery of the Canaries in 1336 is no longer accepted, the Islamic geographer Idrisi noted a Portuguese voyage to the Canaries already before 1154.

In fine condition and wholly untrimmed, with all deckles intact, giving very large margins. The modern wrapper is slightly tattered. A detailed study of early voyages to the Canary Islands, with the texts of primary sources in Greek, Arabic and other languages. 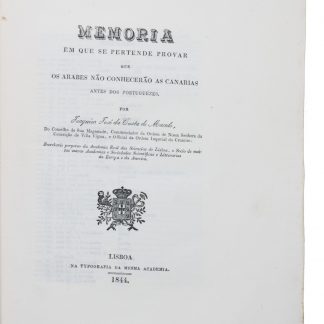