Slave trade by Persian vessels in the Arabian Gulf

[Slave Trade]. Class B. Correspondence with British Ministers and Agents in Foreign Countries, and with Foreign Ministers in England, relating to the Slave Trade. From April 1, 1852, to March 31, 1853.

British papers and correspondence with local agents on the international slave trade, including missives exchanged between Colonel Sheil and Earl Granville about steps to be taken against slave trade by Persian vessels in the Arabian Gulf, plans to intercept slaving vessels in the Gulf, the continued slave trade by the "Arabs of the coast" (p. 324) and importation of slaves by Gulf sheiks and a discussion of the penalties to be inflicted on the sheikhs who persist in importing slaves. 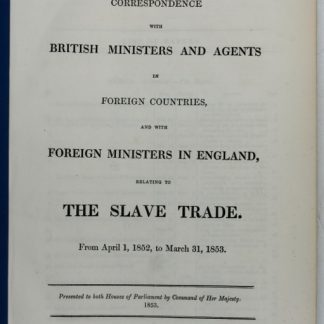