[Slave Trade]. Class B. East Coast of Africa. Correspondence respecting the Slave Trade and other matters. From January 1 to December 31, 1869.

British papers and correspondence with local agents on the slave trade on the east coast of Africa, including reports on the capture of an Arab dhow with a total of 236 slaves and the capture of another dhow in the Arabian Gulf by H.M. steamer "Dryad", a missive from Sheikh Sultan, the Governor of Mogoo, to the British agent regarding the capture of Suliman bin Sooltan's ship on the return from a date-selling journey to "Debay" (Dubai), as well as occurences in Muscat and Zanzibar, with some intelligence provided by Dr. Livingstone. 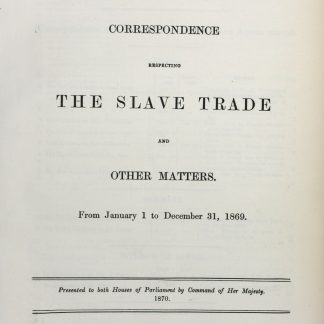