Esso after the Great War

4to. A run, from vol. 1, no. 1, to vol. 3, no. 7. 31 original issues, each 16 pp. with numerous illustrations, occasional sketch maps and diagrams, and advertisements. Each issue near-fine in the original pictorial wrappers.

Published monthly by the Anglo-American Oil Co., Ltd., Queen Anne's Gate, London, S.W. for the information of Employees and Shareholders. Anglo-American Oil was an affiliate of Standard Oil, founded by John D. Rockefeller; in the 1930s it rebranded itself, and took as its name the phonetic abbreviation of its parent company, SO i.e. ESSO. The journal published news about the company’s ships and their captains, both during the recent war and on normal service, portraits and information about director and managers, announcements of general meetings, in-house information relating to the establishment of new branches, contributions of the company to e.g. the war effort, articles on a range of subjects ('The Constitution of Petroleum', 'Production of Crude Oil in 1920', 'The Making of British Roads', etc.; John D. Rockefeller contributes a article in the second issue on ‘Reconstruction in Industry’). Advertisements for Pratt’s Perfection Spirit, a notable petrol of the day, feature prominently, but there are also advertisements for Brooklands, and similar interests. The front and rear cover to each issue reproduces a full-colour illustration of a prominent British building or landmark by Jessie Currie. The Anglo-American journal is rare, with few institutional holdings; copies in such well-preserved original condition are scarce. 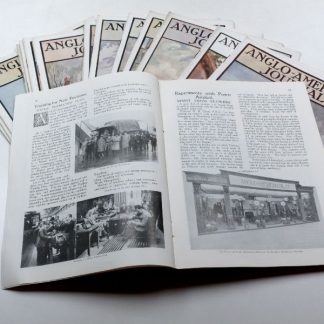