A landmark in Arabic studies

Small 4to. (14), CXXXII, 603, (69) pp. With engraved vignette and the engraved coat of arms of Wilhelm Count Bentink. Contemporary half calf with giltstamped spine label.

Erpenius's famous grammar, a landmark in Arabic studies until the early 19th century. This edition is a line-for-line reprint of the 1748 edition (which in turn repeated the one edited by Golius in 1656), with only the indexes expanded. It also contains a collection of pre-Islamic folk songs, the "Hamasah" of Abu Tammam, added by the editor Schultens, as well as an extensive preface discussing the relationship between Hebrew and Arabic. Erpenius (1584-1624), professor of oriental languages at Leiden, first published his "Grammatica Arabica" in 1613, having completed it four years earlier while staying in Paris with Casaubon. He is regarded as "one of the men whom the study of oriental languages owes its resurrection [...] He set up his own printing shop with Hebrew, Arabic, Syrian, Ethiopian, and Turkish type" (cf. ADB). Until well into the 19th century his works, published in numerous editions, remained the foundation of Arabic language teaching in the west. The editor of this edition, Albert Schultens (1686-1750), also served as professor of Oriental Languages at Leiden (1732-1750). During his lifetime he was the principal teacher of Arabic in Europe, and followed Erpenius's tradition in restoring the reputation of Arabic studies, vindicating the importance of the comparative study of the Semitic languages against those who regarded Hebrew as a sacred language beyond the realm of comparative philology. 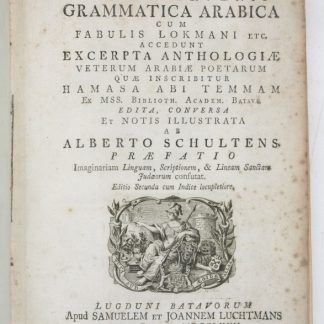