Palestine in 1776: "pestered with the wild and savage Arabs" - no copy at auction in 50 years

Tyron, Richard. Travels from Aleppo to the city of Jerusalem, and through the most remarkable parts of the Holy Land in 1776.

Second recorded copy (all printings are rare) of this little-known travel account of the Holy Land in the late 18th century. Unlike most other examples of this genre, the author was evidently not interested in a refined readership, but chose to publish his work in a popular, brief format. Despite its humble appearance, Tyron's account is a key contribution to Holy Land travel during this period (cf. Talbot), and his accounts of Jerusalem, Bethlehem, etc. are both direct and informative.

Tyron was one of three Britons to visit the region during the second half of the 18th century. Tyron's Protestantism certainly colours his observations; according to Michael Talbot, descriptions such as his "gave further weight to the proof of Biblical prophecy that the Holy Land was desolate and cursed" (p. 43): "A merchant of the Levant Company based in Aleppo, his writing has [...] more of a sense that it was intended to function as a guidebook, with itineraries in various towns and costs of provisions. He also noted the chief economic activities of the region, although describing the local population as very poor and dependent on European trade. As with [Thompson and Haynes], Tyron spent many pages ridiculing the religious rites of other Christian sects, commenting on their ostentation and superficiality. He was disgusted by the marble and gold adorning the Holy Sepulchre, and believed that money alone drove the dominance of the Catholics and the Greek Orthodox Church in Jerusalem. He also continued the theme of a cursed land. Instead of tigers, the barren terrain was 'pestered with the wild and savage Arabs [...] said to be the descendants of Ishmael', claiming this was in fulfillment of prophecies in Genesis. It was because of those wild Arabs that the land was 'now under a curse'". Talbot has argued that it was this popular perception of Palestine as an accursed land which influenced the Restorationist movement for the return of the Jews to Palestine under British protection (as a necessary precursor of the Second Coming) in the early 19th century.

A very worn copy, but a rare survival. Repair to blank right margin of title page, not affecting text; generally browned and duststained; all text present and legible. No copies of any printing are recorded at Anglo-American auctions in the last 50 years. 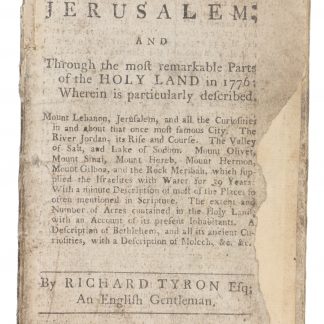 Sie sehen: Tyron, Richard. Travels from Aleppo to the city of Jerusalem, and through the most remarkable …London & Edinburgh, 1781. € 1.500,00
In den Warenkorb