Folio. (12), 509, (3) pp. With woodcut printer's device on title-page, different device on final leaf, and woodcut illustrations of various surgical tools at the end of the preliminaries. Contemporary limp vellum with ms. title to spine.

A woodcut on the final page of the preliminaries depicts 14 different surgical instruments, including a tongue depressor, a forceps, and various instruments for cauterization. Occasional slight brownstaining, but a good copy from the library of the Sicilian physician Blasio Cucuzza, with his ownership on the final page (calling him the "most learned of all Sicilian physicians in Modica, Ragusa and Syracuse") and additional note dated 10 May 1622. 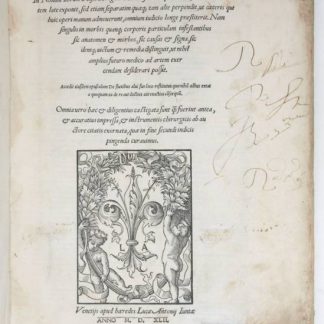