Detailed reports on the slave trade at Muscat, Bahrein, Ras al-Khaimah and Sharjah

Rare but frequently-cited British parliamentary papers with "Correspondence on the Slave Trade, and Measures Taken for its Abolition". Includes a printed sketch of the southern coast of Yemen, illustrating the area in possession of the "Boo-Mehree-Buddooee (Bedouin) Arabs" and identifiying the tribal chiefs as the Sultans of Qishn, Sayhut, and Dhofar (p. 156); also, correspondence between the Imaum of Muscat and the British Resident in the Gulf, in which the latter congratulates the Imaum on the recent peace made between "Tahnoon and Sultan Bin Suggur [the al-Qasimi ruler of Sharjah and Ras al-Khaimah], and that there was a prospect of the poor people of this Gulf enjoying a quiet pearl fishing season, free from the scourge of war, that affliction of mankind" (p. 86). Also, detailed reports on the slave trade at Muscat, Bahrein, Ras al-Khaimah and Sharjah ("Last year Shaik Sultan Bin Sugger's own buggalow brought from the coast of Africa 30 slaves to Rasul Khyma, but this is a rare occurrence, vessels seldom going there from the Joasmee states", p. 90). In all, the volume contains a significant number of references to the Arabian Gulf, Muscat, "Arabs", etc.

Labels and lettering worn; a good clean copy. Formerly in the library of the British and Foreign Anti-Slavery Society; ultimately withdrawn from the British Library of Political and Economic Science (cancellation stamp). 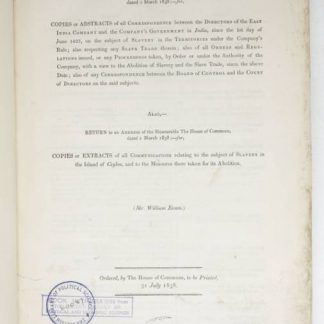