The Don Quixote of Mexico

4to (295 x 220 mm). 4 vols. including additional engraved title-pages, portrait of the author, 31 engraved plates after various artists, and 1 double-page engraved map. Bound in contemporary mottled sheep, richly gilt with tooled borders and spines and with red morocco title labels. Sympathetically restored with later endpapers. With the bookplate of the executed Emperor of Mexico, Maximilian, on pastedown. Additional bookplate of Laurent Veydt (1800-77, Belgian Minister of Finance), as well as letter recording the presentation of the these volumes to Jules Malou (1810-86, Belgian Prime Minister) in 1876.

A large copy of the most famous edition of "Don Quixote" ever produced, with a remarkable provenance. The "Ibarra" edition of 1780 was described by Palau as "magnificent, superior in artistic beauty to all others produced in Spain or abroad"; Richard Ford declares that "no grand library should be without it". Undoubtedly it was on these merits that Ibarra's edition was famously cast in Roman Polanski's 1999 thriller "The Ninth Gate": in the exposition of that film, Johnny Depp's character (an enterprising if vulture-minded rare book dealer) swindles an unwitting couple, heirs to a library to be dispersed, out of what in fact was their pièce de résistance - a set of Ibarra's "Quixote" which he claims is worth "no more than four thousand dollars".

The present copy was purchased (for an unknown sum in pesos) by Emperor Maximilian of Mexico during his brief reign (1864-67) as part of what he hoped would become the nucleus of a National Library; after his execution by firing squad his books were salvaged and sent by mule-back to Vera Cruz, in order to be sold at public auction in Leipzig.

Among the thousands of books amassed by Don Maximiliano, his copy of Don Quixote holds a special place. Younger brother of the Austrian Emperor Franz Joseph I, Maximilian was sent to Mexico at the tender age of 32 in order to provide a figurehead for the French invasion of that country begun in 1861. Dashing and charismatic, Maximilian would ride into battle in full Mexican regalia, with a large white sombrero, the Order of the Mexican Eagle around his neck, and two revolvers and a sabre. The picture was completed by his frisky horse Orispelo and his very own 'Sancho Panza', his secretary Jose Luis Blasio, who rode a tame mule beside him. It is easy to see why modern historians often call the Viennese-born, self-proclaimed Emperor of Mexico a 'Quixotic' figure; even during Maximillian's lifetime one of his critics in French parliament, Jules Favre, mercilessly derided him as a 'veritable Don Quixote'. Such comparisons were undoubtedly justified; yet the romance of Maximilian's tragic misadventure in Mexico is only heightened by the physical evidence that he once owned a personal copy of Cervantes' great novel - in a spectacular and highly sought-after edition, no less.

The Ibarra edition was prepared at great expense over the course of seven years for the Real Academia, printed on deluxe paper in a specifically-designed typeface and illustrated by the foremost Spanish artists of the time. To this day it remains a monument of Spanish printing, and a fitting tribute to what many regard as the first modern novel in the Hispanic tradition.

The dispersal of Maximilian's library itself forms a fascinating chapter in the present volumes' history. Rebels under the command of Benito Juarez captured and shot the emperor on the 19th June 1867. Likely at the instigation of the Mexican bookseller José Maria Andrade, who had yet to be paid for Maximilian's purchases, the books were packed onto mules and dispatched to Vera Cruz, from whence they sailed for Europe. Their sale in 1869 was one of the greatest of the 19th century - and perhaps the greatest sale of Spanish Americana of all time. Hubert Howe Bancroft was a strong buyer of early Mexican imprints at the sale; and thus many of Maximilian's books are today found in the Bancroft Library at Berkeley. Another major spender was J. F. Sabin. According to the results published later that year, the present volumes made 33 thalers - a very respectable sum, but by no means the highest price paid in those rooms. As the bookplates show, they soon made their way into the possession of the Belgian Minister of Finance, Laurent Veydt, who in 1876 presented them to his Prime Minister. We hope that the noble lineage of this set may be continued! 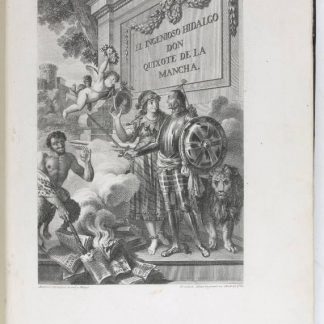