Folio. (188), (34), CCCCCXXXVI [= CCCCCXXXVIII; 538] pp. Title-page in red and black and separate title-page to index, both with woodcut border. Elaborately decorated calf, with image of the crucifixion on both panels. Blinrd-tooled spine.

First and only Paris edition of "Historiae naturalis", with the annotations by Hermolaus Barbarus (1454-94), an Italian Renaissance scholar. His discussions of Pliny's "Naturalis Historia" was first published as "Castigationes Plinianae" in 1492, in which he made over 5000 corrections to the original text. Due to this work and other classical works he translated or edited he was considered a leader authority on Latin and Greek work on antiquity. The present copy was published by Jean Petit, in his days a leading bookseller in Paris, whose name and device are shown on the title-page with decorative woodcut border. The title-page to the index, here bound before the text, has the initials of the printer Nicolaus Sauetier.

The original text was by Gaius Plinius Secundus (AD 23-79), better known as Pliny the Elder. He was a Roman author, naturalist, and natural philosopher, as well as naval and army commander of the early Roman Empire, and personal friend of the emperor Vespasian.

The "Naturalis Historia" is one of the largest single works to have survived from the Roman empire to the modern day and purports to cover the entire field of ancient knowledge, based on the best authorities available to Pliny. He claims to be the only Roman ever to have undertaken such a work. It comprised 37 books in 10 volumes and covered over 20,000 facts on topics including the fields of botany, zoology, astronomy, geology and mineralogy as well as the exploitation of those resources. It remains a standard work for the Roman period and the advances in technology and understanding of natural phenomena at the time. Some technical advances he discusses are the only sources for those inventions, such as hushing in mining technology or the use of water mills for crushing or grinding corn. Much of what he wrote about has been confirmed by archaeology. ''We know from Pliny that there were important pearl fisheries in the Gulf [...] Pliny identifies Tylos (Bahrain) as a place famous for its pearls [... He] attests that pearls were the most highly rated valuable in Roman society, and that those from the Gulf were specially praised [...] The pearl related finds at the site of El-Dur indicate the site was integrated into the maritime trade routes linking the Roman Empire, the Persian Empire, India and South Arabia'' (Carter). Book 6 holds a chapter that gives the first detailed account of the regions around the Gulf, including what are now Qatar, the Emirates and Oman.

Panels shaved, affecting the decoration, spine cracked on the hinges. With manuscript ownership on title-page of the index. A good copy. 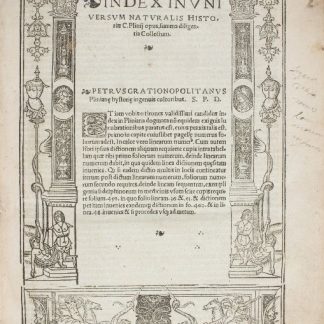