8vo. 2½ pp. on bifolium. Includes an engraved portrait of Lord Byron with a print of his poem, "Fare thee well".

To an unidentified Lord, contributing 10 pounds towards the erection of a new chapel: "In compliance with the wish you have expressed to me in so kind a manner, I will settle an endowment of Ten Pounds on the Minister of Petton. I should have great satisfaction in doubling that sum, if the New Chapel were open to the use of Christians of a different denomination, as is the case with Protestant Churches abroad - but as long as the present exclusion system is continued I shall feel that Roman Catholics & Dissenters have likewise a claim to the Landowner's assistance. Your Lordship will I trust pardon me for giving this explanation in order to account for the smallness of my contribution. Should I travel Northwards next Summer, I shall be happy to accept yours & Mr Maltby's gratifying invitation [...]".

A highly educated and strictly religious woman, Anna Isabella seemed an unlikely match for the amoral and agnostic poet Byron. Indeed, the marriage lasted but a year, as Byron was given to fits of anger and maintained an incestuous relationship with his older half-sister Augusta Leigh. The couple separated in March 1816. Their only child, Augusta Ada Byron (Countess of Lovelace), was a gifted mathematician and is credited with creating the first computer programme. 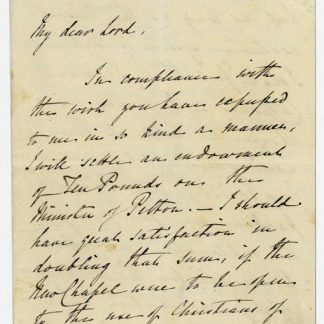