"Lady Noel Byron requests Mr Hailes to send Nos. 1 & 2 of the Library of Entertaining Knowledge & Dr Brown's work on the 'Nervous Disease of the Spine" to Mrs Noel, Bullock's Hotel, Windsor, to be placed to Lady Noel Byron's account." With Byron's poem "Fare thee well!" (in letterpress) pasted to the second leaf; traces of mounting on reverse.

A highly educated and strictly religious woman, Anna Isabella seemed an unlikely match for the amoral and agnostic poet Byron. Indeed, the marriage lasted but a year, as Byron was given to fits of anger and maintained an incestuous relationship with his older half-sister Augusta Leigh. The couple separated in March 1816. Their only child, Augusta Ada Byron (Countess of Lovelace), was a gifted mathematician and is credited with creating the first computer program. 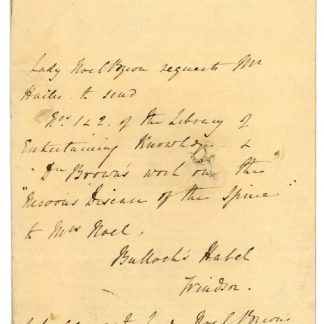