4to. (90), 560 [but p. 255f. repeated], (10) pp. Latin title printed in red and black; one Latin and two Arabic (woodcut) half-titles. Preface in Latin, text in vocalized Arabic throughout. Contemporary half calf with marbled covers and giltstamped label to sparsely gilt spine.

The famous "Hamburg Koran": while not actually (as it was long considered) the first printed Qur'an ever, the first accessible printed edition of the Arabic text. Only in 1987 was a unique copy of Paganino de Paganinis's Venetian edition (c. 1538) rediscovered, a work whose press run either was destroyed immediately or was limited to the sole surviving specimen, apparently a proof copy (cf. A. Nuovo, "Il Corano arabo ritrovato", in: Bibliofilia LXXX, IX, 1987). Four years after the present edition, in 1698, Lodovico Marracci produced his own Qur'an, but its two big tomes were anything but easy to consult - hence, the Hamburg Koran remained "the only available and handleable" (Smitskamp) edition until the early 19th century.

Abraham Hinckelmann (1652-95), a Hamburg theologian, studied at Wittenberg and collected many Oriental manuscripts. He compiled a Quranic lexicon in manuscript and planned a Latin translation of the Koran, but this was never realised.

Some browning throughout, as common due to paper; slight waterstaining near end. Ms. ownership of Joseph Venturi in Arabic, Hebrew, and Latin ("emit Romae An. 1789") on Latin title (his quotation from Brunet on first Arabic title), with early 19th c. ownership of Blasius Milani. This is the uncommon variant with two different woodcut Arabic titles. 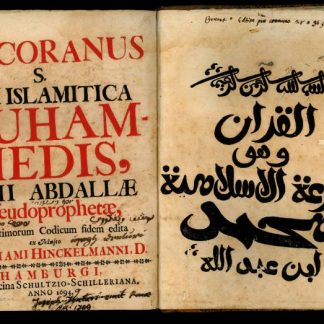