The first Gospel printed in interlinear Arabic and Latin

The rare first re-issue, with new preliminary matter only, of the first Gospel printing in the interlinear Arabic and Latin version, prepared at the same time and printed by the same press as the first Arabic-only Gospel. These were the first works ever produced by Ferdinando de' Medici's "Medicea" press, founded by Pope Gregory XIII to spread the word of Christ in the Orient. Supervised by the able scholar Giovambattista Raimondi (1536-1614), its strength lay in oriental, especially Arabic, printing. After Raimondi's death, the press relocated to Florence.

The Arabic text is printed in Robert Granjon's famous large fount, generally considered the first satisfactory Arabic printing type; as all early printed editions of the Arabic Gospels, it is based on the Alexandrian Vulgate (cf. Darlow/M. 1636). The Latin version is by Leonardo Sionita. As issued in 1591, the work began with page 9, without a title page or any preliminary matter at all: "the intended prefatory matter was apparently never published" (Darlow/M.). The 1619 re-issue contains 4 pages of preliminary matter (title page and a note "typographus lectori"); there exist copies with two additional leaves of dedications not present here. Another re-issue, much more common, was released in 1774. 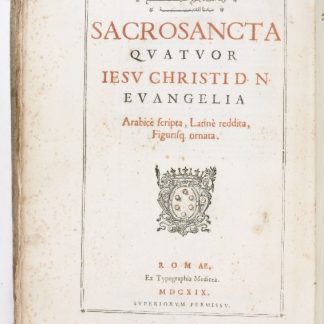