Hand-coloured and signed by the artist

Number A-266 of the first and limited edition, signed and hand-coloured by the artist. Few details are known of the life of Friedrich Schiff (1908-68), one of the great cartoonists of Shanghai between the World Wars. A native of Vienna, he moved to Shanghai in 1929, returning to Europe only after the defeat of Nazi Germany. During his 18 years in the East he became known for his iconic and colorful caricatures of the city's daily life in the International Settlement in the 1930s and 1940s. His China sketches beautifully capture the lives of everyone from police to coolies to expats to sailors to sing-song girls; his unique signature style undoubtedly continues to influence many China/Asia sketch artists to this day.

A very fine copy of Schiff's most famous book. 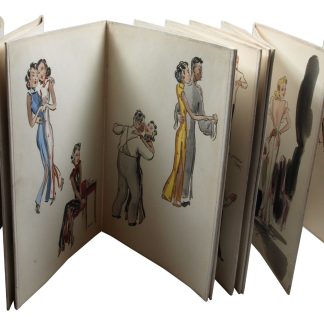