24 engraved views made for the Emperor of China, showing the campaign expanding his western territories

Oblong Imperial folio (35 x 48.5 cm). A series of 24 numbered engraved views (plate size 27 x 43 cm; image size 24 x 41 cm) of the conquests of the Qianlong Emperor of China in what became Xinjiang province in western China, advancing to the area around the modern Chinese-Kazakhstan border, and the celebrations that followed in Beijing and elsewhere. With reproductions of the engraved explanation of the views, both in the earlier state covering views 1-16 and the later state covering views 1-24. Loose prints in folders in a modern archival box.

A fine complete series of 24 large and meticulously engraved views of the western conquests by the Qianlong Emperor (1711-1799), the favourite grandson of the Kangxi Emperor in the Manchu Qing dynasty, who ruled China officially from 1735 to 1796. In the latter year he took the title of Emperor Emeritus, though in fact he held the reins of power to his death in 1799. The first series of 16 views illustrates events from 1754 to 1760, the first and most important of what the Chinese termed Qianlong's ten great military campaigns. From his base in Beijing, he took the Chinese army across the Gobi desert and into the Dzungar Khanate, where he decimated the Zunghars, a nomadic western Mongol people, and made the region into Xinjiang province, establishing the western border of China as we now know it. Hundreds of thousands of Zunghars were killed and most of the few that survived fled to what is now Kazakhstan. The campaign also greatly increased Chinese influence over Mongolia and Tibet. It largely established Chinese control of the highly influential Dalai Lama and set the stage for the suppression of the Turkic-speaking Islamic peoples in the southern part of the province, also covered in the present series. The views give very detailed images of the battles, with large numbers of foot soldiers and cavalry, often with the Chinese troops using Western long guns (as well as cannons) against the Zunghars' bows and arrows. It shows the troops, clothing, arms, camps and fortifications of both sides, and the use of camels and other beasts of burden, all in the spectacular mountainous landscapes of the region. The last three plates of the original sixteen show the presentation of Islamic prisoners to the Emperor, and celebrations of the victory.

The Qianlong Emperor had close relations with Europe and brought several missionaries into his court, mostly Jesuits. In 1765 he ordered the production of a series of 16 European copperplate prints commemorating the campaign against the Zunghars, drawn by the leading European artists in China: the Milanese Jesuit Giuseppe Castiglione (1688-1766), then the most famous European painter in China, the Roman Augustinian Jean Damascène (Sallusti), the Roman Jesuit Jean Denis Attiret (1702-1768) and the Bohemian Jesuit Ignaz Sichelbart (1708- 1780). The first edition was engraved on enormous plates under the direction of Charles-Nicolas Cochin in Paris in the years 1769 to 1774, but few of his prints ever reached China and it was decided to have the present new edition of the same views produced at a more practical scale. It was engraved in Paris from 1783 to 1785 by Isidore Stanislas Helman, who published it together with Nicolas Ponce. This edition was a great success. While the original series comprised 16 views, Helman added two supplementary series to his edition, each with four views, resulting in a total of 24. The first supplement (1786) shows the ceremonial breaking of new ground with an ox-drawn plough and three views that could be assembled to form one panoramic view of the Emperor's procession through Beijing. The second supplement (1788) shows the Emperor's various celebrations, mostly in honour of his ancestors.

An engraved plate of text was produced to accompany Cochin's first edition of the first 16 views, giving a brief explanation of each view. Helman appears to have acquired the plate and added descriptions of the 8 supplemental plates, though those for the original 16 were not updated, so that they still give the names of the earlier engravers, even though the imprint at the foot of the description for the panoramic view (plates 18-20) names Helman and Ponce. This plate of text is present here in a later printing on wove paper without a watermark. Most of the views are on a laid paper stock watermarked: dovecote = "T DUPVY F|AUVERGNE 1742", that in views 1-16 similar to Heawood 1234 (London, 1784).

In fine condition. A rare and remarkable series of views made for the Qianlong Emperor, mostly showing his conquests in western China. 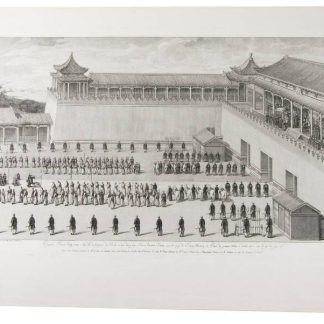