Lokman was a legendary sage of the pre-Muhammedanian era, occasionally said to have been king of Yemen, a prophet, or an Abessinian slave. This late 13th-c. adaptation of a Syrian translation of Aesop's Fables was attached to his name. Since their first publication in Europe in 1615, the "Fables" constitute an obligatory passage for learning Arabic, which explains the proliferation of versions (including those for school use). The collection was edited by Thomas Erpenius (1584-1624), professor of oriental languages at Leiden. In 1613, after his return from Paris, he set up a private press with types cut specially for him.

Some fingerstaining, waterstaining and duststaining; lower corner of t. p. torn off (no loss to text); an early student's pen scribblings on title page, and a later owner's pencil notes in Arabic in margins and on final flyleaf. 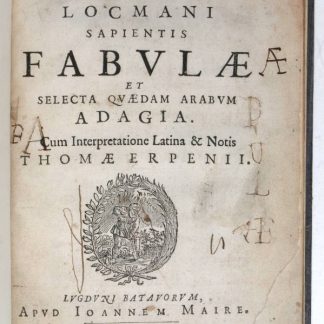